Are you thinking about purchasing one of the most popular Mexican dog breeds? Or perhaps you’re just an enthusiast wanting to learn more about canines from this part of the world.

Whatever your reason, you will find everything you are looking for right here.

You will learn about the history, behavior, and grooming requirements of each Mexican dog breed, plus additional information such as lifespans, height, and weight. There are some fun and interesting facts about each breed.

Mexico is most famous for its vibrant culture, flavorful foods, and much-loved alcoholic beverage, tequila.

What is perhaps not so well known is that Mexico is a nation of dog aficionados. According to the American Pet Products Association, an estimated 65% of United States households own a pet, with dogs being the most popular animal to own.

Mexican dogs are rare, unique beauties, and they are loved across the globe. If you want to know more about these fascinating creatures, here are four of the most popular Mexican dog breeds. 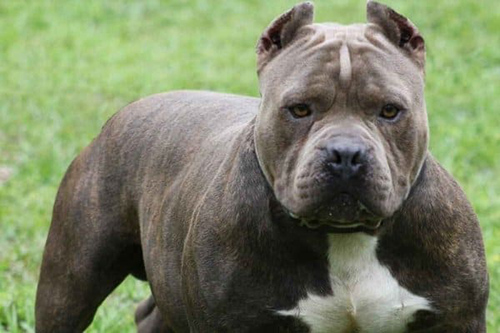 Also known as ‘the ‘Miniature Pitbull’ or the “Mexican Pitbull’, the Chamuco was first discovered in the center of Mexico.

The Chamuco was developed in the 1970s and has been secretly bred as fighting dogs.

Despite its killer instinct, the Chamuco is a home buddy. It loves being around its owners and displays a confident character when around humans in general.

The breed makes an excellent guard dog and watchdog because of its natural ability to judge the intent and character of strangers.

Nevertheless, we suggest that you supervise when children are with this breed. If the Chamuco has not been properly socialized, it doesn’t do well with other dogs and is aggressive and standoffish.

The Chamuco is naturally energetic. They are in their element when they have lots to do. Taking the dog for brisk walks, jogs, doing nose work, or training for agility courses is a great way to keep the dog busy.

When Chamucos get bored, they may get aggressive and are known to engage in behaviors such as digging, barking, chewing, and pulling.

The Chamuco doesn’t have much hair so grooming is a simple process. To prevent shedding, owners should brush the coat twice a week.

Trim the nails when they start getting too long and brush their teeth often with veterinarian dog approved toothpaste.

We suggest you bathe your Chamuco a minimum of once a month or when it starts smelling more than normal.

Fun Fact: Chamuco is a slang Mexican term for the word ‘devil’. The breed’s name is a reflection of its tenacity and temperament. 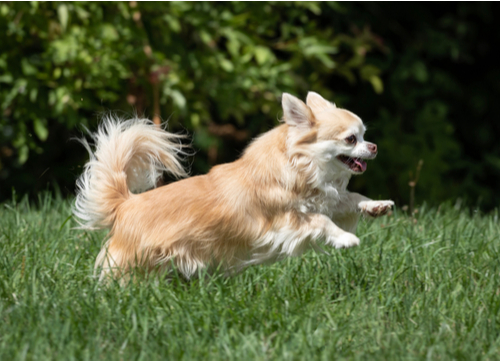 For such a tiny dog, the Chihuahua has a larger-than-life personality. This most popular Mexican dog breed is the life and soul of the party.

The breed is a national symbol in Mexico, and it is one of the oldest South American breeds. It is wildly popular worldwide with stars like Paris Hilton, Brittany Spears and Jennifer Love Hewitt often snapped with their “purse dogs.”

Chihuahuas suffer from the Napoleon complex; they are short, and they know they know it. They make up for it, acting out at every opportunity.

If you are planning on purchasing this cute bundle of fur, you will need to train the dog and train it well. When a stranger walks through the door, they will bark as if they have the strength of a rottweiler.

When this popular Mexican dog breed gets in protection mode, the Chihuahua acts like superman and shows no fear no matter how dangerous the threat might appear.

Because they are so cute, owners are known to treat Chihuahuas like toys and not pets, hence the term “purse dogs”.

As a result, they have gained a reputation for being absolute terrorists and according to a study published in the Applied Animal Behavior Science Journal, Chihuahuas are amongst the top three most aggressive dogs.

When Chihuahuas have been trained properly, they are lively, devoted, and loyal.

Unlike most dogs, they don’t require much exercise which makes them the perfect apartment canines. They love being around their owners and make great family pets.

Although the Chihuahua requires minimal grooming, their fur does need brushing at least once a week to prevent it from tangling and matting.

When bathing them, make sure the water is no more than 4 inches deep, and a mat or a towel is placed on the surface to prevent your pet from slipping. Avoid their snout and eyes because those areas are sensitive to soap.

The long-haired Chihuahuas require a bit more extra work because they will need a regular trim to make sure their hair doesn’t grow out of control.

But other than that, snip their nails when needed and brush their teeth daily.

Fun Fact: The earliest specimen of Chihuahua was found in the Mexican state of Chihuahua, hence their name.

You are probably more familiar with the name ‘Mexican hairless dog’. If grooming is not your thing, or you suffer from allergies, the Xoloitzcuintli is the perfect dog for you because the only hair on its body is a tiny little tuff on the top of its head.

This ancient breed, spanning back 3,000 years, was highly respected by the Aztecs. The first part of the breed’s name, ‘Xolotl’ was the name of an Aztec god.

The second part of the name means ‘dog’. Historically, it was believed that these dogs were deeply connected to the spiritual world.

Xoloitzcuintli’s love their owners but they are standoffish with strangers. They are known for picking favorites in a family.

Despite their size, this popular Mexican dog breed is calm in nature so you won’t need to worry about them dashing around the house destroying furniture as they go.

This breed is not interested in rough behavior, so even though they are good with children, it is important that energetic kids are closely monitored when playing with these dogs.

When Xoloitzcuintli’s are familiar with other dogs, they are fine and will act accordingly unless they feel threatened.

It is important to mention that the Xoloitzcuintli is a primal breed, it has strong protective instincts and a high prey drive. It will go on a wild goose chase with anything that moves, so if you are planning on getting one, a fenced-in yard is a must.

Despite the fact that the Mexican hairless is a calm dog, it is a high-energy breed and needs plenty of exercises. If you are a jogger, taking your pet for a morning run is ideal.

Since they don’t have any hair, grooming is a simple process. Nevertheless, you need to bathe this popular Mexican dog breed once a week to protect the skin against acne. To prevent dry skin, use a good moisturizer.

Additionally, cut the Xoloitzcuintli’s nails when required and brush their teeth daily.

Fun Fact: They are the oldest breed of dog in the world; they have been around for over 3500 years.

Despite the name, this exotic-looking small dog actually originates from Mexico.

There has always been a heavy debate surrounding the origins of this breed, but the evidence suggests they are from Mexico and the Mexicans have claimed the breed as such.

Unfortunately for this popular Mexican dog breed, they have been labeled as the world’s ugliest dogs and have dominated the competition for many years.

There are two varieties of the Chinese Crested dog, one called the ‘powderpuff’ with really thick, long hair, and the other only has hair on the tail, feet, and head.

If you are a couch potato and you are looking for the perfect companion, this is your ideal pet.

They are totally uninterested in running the streets like other dogs. But they are extremely athletic, they can jump over tall fences and do very well competing in agility.

They love their family but don’t like strangers, and if they haven’t been properly socialized, it is not uncommon for them to bite unwelcome guests.

Despite being one of the most popular Mexican dog breeds, Chinese Crested dogs do have some negative characteristics that you might want to take into serious consideration if you are thinking about buying one.

They are prone to separation anxiety which means they need a lot of attention; they don’t like being left alone for long periods of time.

So if you spend long hours at the office, a Chinese crested dog might not be ideal. When they do get anxious, they resort to excessive barking and destructive behavior.

They are notorious for breaking your favorite household objects, they can be stubborn and difficult to train.

And if they are ever kept in confinement, you can expect them to conduct a great escape and dig their way to freedom.

Although limited grooming is required for the hairless variety, you will need to commit to a rigorous skincare regimen.

Ladies, you will probably spend more time moisturizing their skin than you will your own.

The hairless type must have the hair on its head, tails and feet combed several times a week to prevent it from tangling. Bath your Chinese crested dog with a shampoo designed for sensitive skin.

Weekly or twice a month is enough. After shampooing, use a moisturizing conditioner, this helps keep the skin smooth and the fur soft.

Additionally, you will need to apply a moisturizer to the skin a few times a week to keep it from getting dry. Again, the moisturizer should be specifically for sensitive skin and free from fragrances and dyes.

The powderpuff Chinese crested dog needs to have its fur brushed daily with a soft bristle brush.

Due to the length and fine texture of the hair, daily brushing is essential to prevent it from matting and tangling.

Shampoo and condition the coat once a month, this variety also has sensitive skin and will require you to use the same products as with the hairless version.

The Chinese Crested dog breed is prone to tooth decay; therefore, get into a routine of cleaning your pet’s teeth daily. Cut your dog’s nails as and when required.

Fun Fact: This popular Mexican dog breed was made famous by the burlesque dancer Gypsy Rose Lee. After her sister gifted her with a Chinese crested dog called Fu Man Chu, she fell in love with them and became an advocate and a breeder of the dogs.

Regardless of the breed, dogs are recognized internationally as ‘man’s best friend.’ The strong bond between dogs and humans goes back thousands of years and it will continue for many more years to come.

Several studies have concluded that they are beneficial for our physical and mental well-being, they alleviate loneliness, they reduce stress levels and they love their owners unconditionally.

The most popular Mexican dog breeds are some of the most well-loved dogs in the world because of their unique characteristics and their skillful attributes.

If you were considering buying a Mexican dog breed, you should now have enough information to make the right choice. 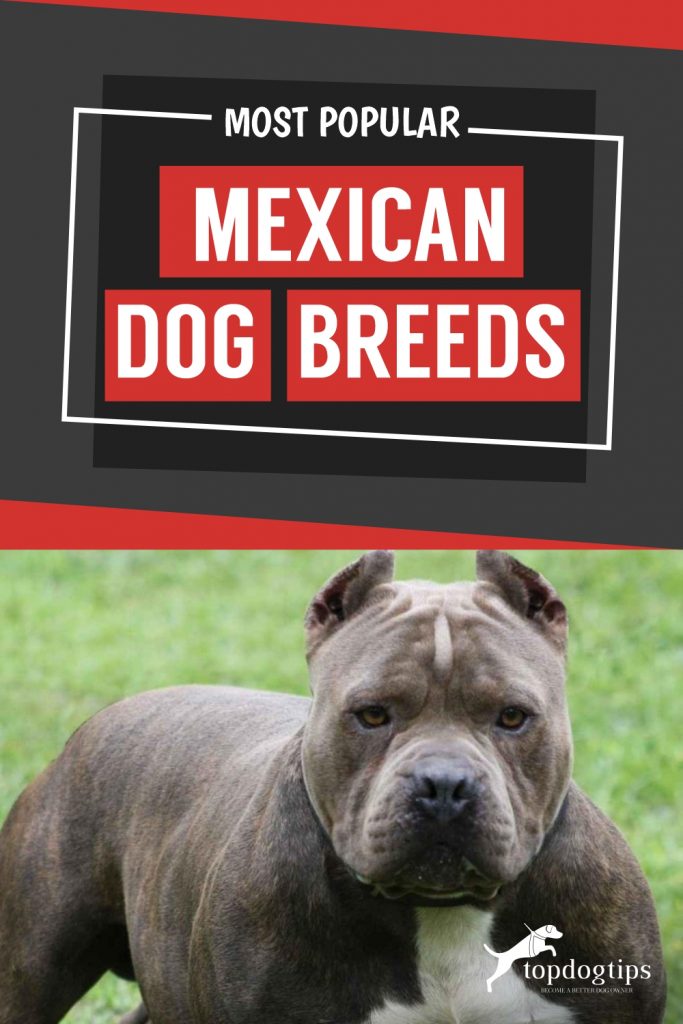