As an adorable companion for young families, seniors, and everyone in between, the Maltipoo is a highly devoted pup committed to their family.

They love accompanying their family on walks, snuggling on the couch, and spending the afternoon people-watching at the park. As a non-shedding breed, this dog is perfect for dander sensitivities.

The Maltipoo is a combination of the Maltese and Poodle breeds. This dog is gentle, brilliant, and playful, adapting every positive quality of each parent breed.

The Maltipoo is patient and kind, making them ideal for every living situation, whether a busy family or individual senior. This breed is a small breed, staying under twenty pounds.

As it has a beautiful disposition and a nearly hypoallergenic coat, the Maltipoo is steadily gaining popularity.

This dog is easy to train and even easier to love. The easy-going nature makes this breed ideal for first-time dog owners. 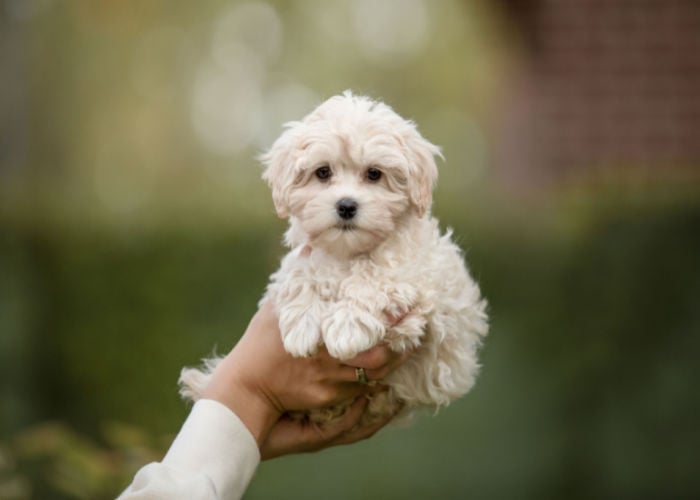 This mixed breed dog won’t grow larger than 14 inches tall, placing them in the small dog category. Their weight can vary slightly, with an average weight of 5-20 pounds.

Their soft coat is medium to long and may be curly or wavy (depending on the mix). As this dog has diverse parents, the Maltipoo is virtually any color but is most commonly a combination of white and cream.

Many dogs have bicolor, tricolor, or marbled coats. Known as a designer breed, it’s often difficult to predict this breed’s appearance with certainty.

Currently, a smaller version of the Maltipoo, known as the “teacup Maltipoo” is gaining popularity, but experts warn that the AKC doesn’t recognize teacup breeds due to the many health concerns associated with the tiny pups.

Many experts indicate a teacup-sized dog is often bred, focusing on the appearance and not on the physiological welfare of the dog. Many pocket dogs that fit into your purse are adorable to look at but can have significant health issues.

Health issues, including luxating patellas, heart disease, and dental problems, run rampant with teacup pups. Unfortunately, dogs are particularly susceptible to pneumonia and upper respiratory issues when they are little.

As Maltipoo dogs are already a small breed, it’s always wise to speak with a vet before seeking out a “teacup Maltipoo.”

This breed’s temperament is hard to beat. These dogs are lovers of a gentle and affectionate nature.

This breed loves to have fun and is a predominately happy breed. The Maltipoo is entirely content sitting with its owner, playing fetch, or snuggling on the couch.

Each parent breed makes this hybrid unique. Every Maltipoo has a massive personality, with energy from the poodle parent.

They love being cuddled and loved by their human, which typically comes from the Maltese parent. Most dogs are alert and often bark at anything suspicious but seldom show aggression.

This breed will get along with almost anyone, especially when they’re socialized in early puppyhood. 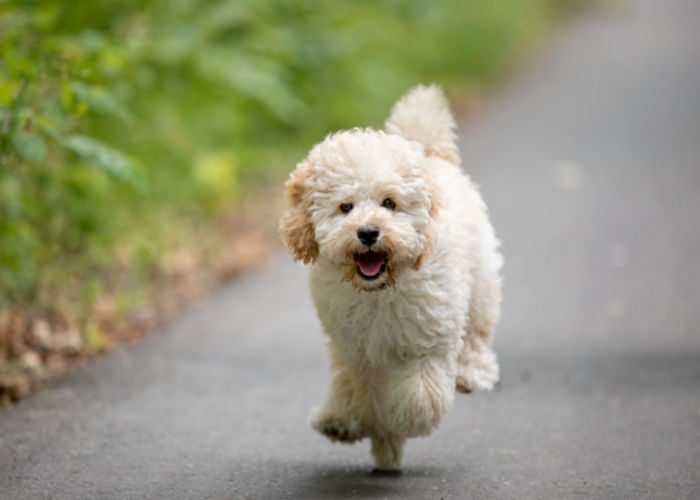 The Living Needs of a Maltipoo

This dog truly believes in being a family member and should always be treated as such. The Maltipoo needs to remain indoors with their humans, preferably on a comfortable surface like a couch.

As these dogs aren’t huge fans of being outdoors, they don’t require a lot of outdoor space. In fact, they thrive in apartments and smaller areas.

Regardless of their space requirements, they still need daily exercise to get rid of the excess energy. A Maltipoo can often be noisy, alerting their family if they hear or see anything out of the ordinary.

When you’re living close to neighbors, you’ll want to enlist consistent training to teach them what to bark at.

This dog requires an abundance of patience; the Maltipoo is highly intelligent, but they are also incredibly sensitive.

An aggressive tactic will cause the pup to shut down. Positive reinforcement training, plenty of treats, and play times will speed up the training process.

The Maltipoo is a beautiful family dog that remains excellent around children. With such gentle personalities, this dog will get along well with almost anyone, whether animal or human.

The Maltipoo gets along well with other dogs or cat households, even if they haven’t been raised alongside each other. These dogs require guidance on which toy is theirs to play with and which remains off-limits.

Remember, small children will require strict supervision around these dogs and should never be left alone with a Maltipoo.

These dogs are quite small and fragile and can be seriously injured if a child falls or steps on them. It’s critical to monitor the interactions between your dog and all children, especially those under ten.

Caring for Your Maltipoo

While these dogs do have a low-shedding coat, the Maltipoo can be a high-maintenance dog when it comes to grooming. The coat is a medium-long wooly coat that requires daily brushing to keep it clean and healthy.

A coat that isn’t brushed enough will develop painful matting and sores on the skin. The Maltipoo will need monthly baths with face and eye clipping (to keep the fur out of their face).

As this breed experiences dental issues, you’ll want to brush their teeth at least a few times a week.

A Maltipoo has high energy levels but only requires moderate levels of exercise. Short 15-minute walks or playing fetch indoors are often enough to keep them healthy and happy.

These dogs are always eager to play, so incorporate fun into the training. Unfortunately, the Maltipoo requires plenty of time to grasp potty training fully (whether inside on pads or outdoors.) 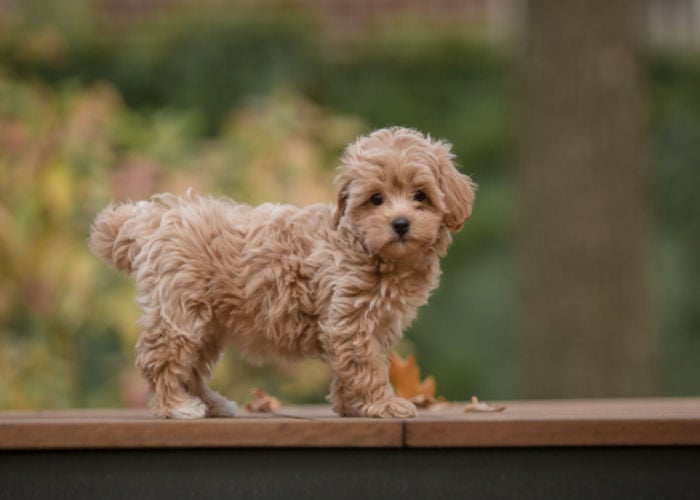 Understanding the Health of a Maltipoo

The average lifespan of a Maltipoo is between 10-13 years. Although health issues aren’t exceptionally common for Maltipoos, there are still conditions to watch for as a responsible pet parent.

This canine disease is predominately found in pure white dogs, although a few more cases have popped up with different coat colors over the years. Maltipoos with this condition experience tremors throughout the body but aren’t painful.

This condition also causes a lack of coordination, rapid eye movements, and full-body tremors. Unfortunately, this disease presents around six months to three years old and is often associated with stress or excitement.

Studies are still being performed to determine why this occurs with white dogs, although many believe it’s an autoimmune reaction.

This condition will cause seizures in the dog but is often managed through medication. At this time, there is no cure available for dogs with epilepsy.

Thankfully, a dog can live a happy and healthy life with proper management, which can stem from an unknown cause or heredity.

Also known as “slipped stifle,” this condition is common in small dogs. It starts when the patella, which holds three parts (the femur, patella, and tibia), is not correctly lined up.

This misalignment causes lameness in the leg or an atypical gait (like a hop or skip). Typically, this condition is present from birth, although the actual misalignment may not always occur until much later in life.

The rubbing caused by patellar luxation will lead to arthritis, a degenerative joint disease.

This degenerative eye disorder will eventually cause blindness from losing photoreceptors at the back of the eye. PRA is a detectable condition years before the dog will show any direct signs of blindness.

Thankfully, dogs can use other senses to compensate for the condition, allowing a full and happy life. Make sure you limit any movement of furniture around the home to prevent mobility issues overall.

This condition affects many different toy breeds of dogs. When a Maltipoo has Legg-Perthes, the blood supply at the top of the femur (the largest rear leg bone) decreases significantly.

As the blood flow decreases, the head of the femur begins to disintegrate.

Typically, the first signs of Legg-Perthes are limping or atrophy of the leg muscle, often when the puppy is four to six months old.

This condition is corrected through surgery by removing the diseased femur so it isn’t attached to the pelvis. As scar tissue develops, it creates a false joint that allows the dog to remain pain-free.

Prognosis is very good after the procedure, with many dogs only suffering from minor lameness.

This condition is an abnormal blood flow between the body and the liver. The liver is responsible for detoxifying the body, metabolizing nutrients, and eliminating drugs.

Warning symptoms of this condition include neurobehavioral abnormalities, lack of appetite, hypoglycemia, and stunted growth. Most signs appear before two years of age.

A special diet and corrective surgery can help manage this condition long-term. 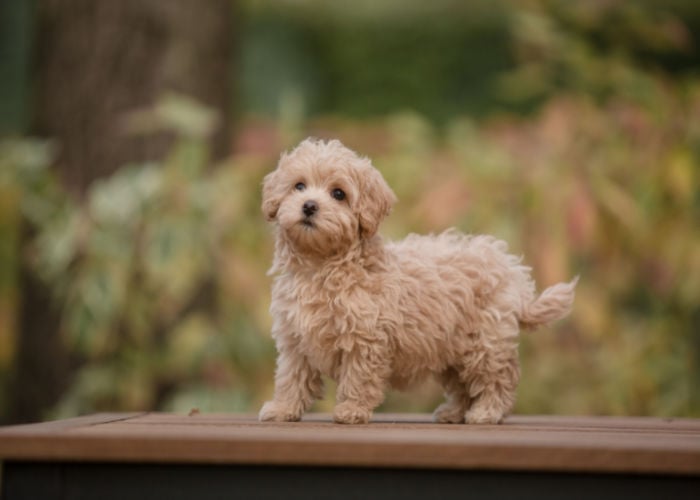 Things to Consider Before Purchasing a Maltipoo

Before purchasing a Maltipoo, always research common health concerns that impact the Poodle and Maltese dog. Both parents should hold health clearances from the Orthopedic Foundation for Animals for patellas and thyroid.

They should also receive certification from the Canine Eye Registry Foundation (CERF), ensuring the eyes are normal (including a DNA test for progressive retinal atrophy (PRA).

Unfortunately, many health issues don’t appear until the dog reaches full maturity. Many health clearances are given to dogs younger than two years.

As such, it’s vital to choose a breeder that won’t breed the dog until they’re at least two or three years old. Also, always look for a breeder who guarantees the dog against most health conditions.

Many breeders will help cover the cost of surgery or care (should your dog wind up with the condition) or offer an exchange for a different dog.

Make sure you read all breeding contracts carefully for the terms and conditions of the sale and stick with reputable breeders to limit the likelihood of health issues.

The History of the Maltipoo

The Maltipoo is a new crossbreed, which unfortunately holds almost no history at all. This breed was first bred 20-30 years ago.

The dog’s popularity has continued to skyrocket with an even temperament and hypoallergenic reaction. In fact, the Maltipoo is currently one of the most popular designer dog breeds.

Initially, the Maltipoo was created to be a small-breed companion dog for allergy sufferers. Although many will debate a hypoallergenic status, every dog produces different levels of allergens.

In any case, this adorable fluff ball is skyrocketing in popularity. The Maltipoo is exceptionally popular with celebrities and remains one of the more popular designer breeds.

Traditionally speaking, the Maltipoo isn’t officially recognized as an actual breed, although many fans have developed the North American Maltipoo Club and Registry.

Despite popular myth, there is no such thing as a hypoallergenic dog, as all canines will produce allergy-inducing saliva and dander.

Thankfully, the Maltipoo sheds very little and doesn’t drool much, making them less likely to trigger allergies in some individuals. 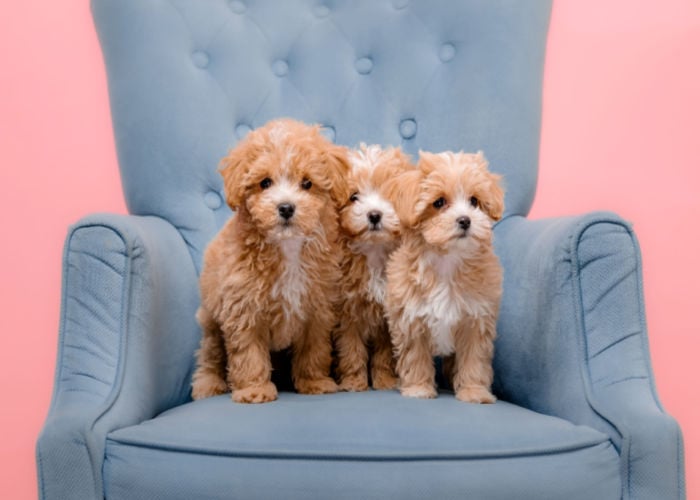 The Maltipoo crossbreed is known for its adorable looks and distinct small size. No one could ever pass a Maltipoo mixed breed without looking back and adoring such a cute pup.

However, just like any dog breed, there are so many things to consider before adopting a Maltipoo. Since the Maltipoo is a small dog breed, it needs extra caution and pampering to take care of this pooch.

They may also be more prone to health issues due to their small size. Still, it’s a delight to have a Maltipoo in your home.

If you want to get one, make sure to get them from a reputable breeder to double-check its health background. You can also do more research to ensure you can commit to a Maltipoo pup and learn how to keep them happy and healthy.