I decided to take it really easy this week because I have been wanting to wear this delicious glowing shade green as a final salute to our neon/brights theme this summer and also because I have been a little bit busy after work the last week leaving not much time for nails. With my husband being away, I’ve been trying to get as much housework done as I can so that I can have full days to relax on my days off. The other night, I decided to cram in laundry, dinner and for some reason unclogging the shower drain into the 3 hours before I needed to start winding down for bed and boy was I exhausted afterwards! You people with children, I don’t know where you find the energy, but hats off to all of you! 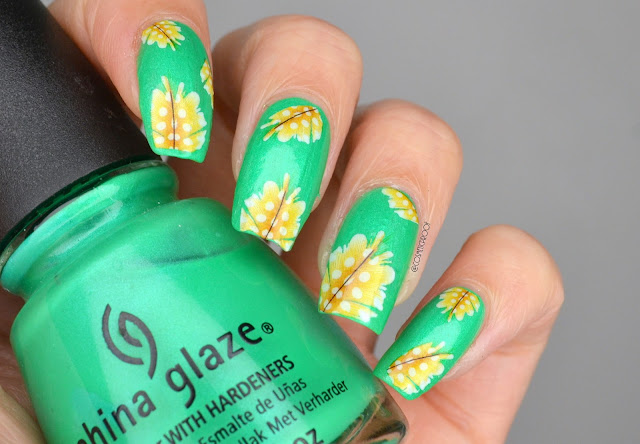 Purchased by me
I don’t know how long I have had this polish, but it’s probably awhile considering I haven’t purchased any China Glaze polish in about 5 years! I used to purchase a few as I used to work near a Chatters hair salon which carried them as well as Winners which had the occasional deal. Now, I work near nothing that carries nail polish so maybe that’s a good thing!
Today’s manicure doesn’t need a whole lot of explanation as I kept it pretty simple so that you could see just how bright and glowy China Glaze “In the Limelight” is! It’s a bit streaky, but most of it evens out by the second coat. I fixed a few streakier areas with a touch up here and there. It also dried matte which I never really like so I applied the CND Vinylux Longwear Topcoat to make it shiny! The feathers are water decals from Born Pretty that I applied in random areas and I think are kind of fun especially because the yellow pairs well with the bright green. 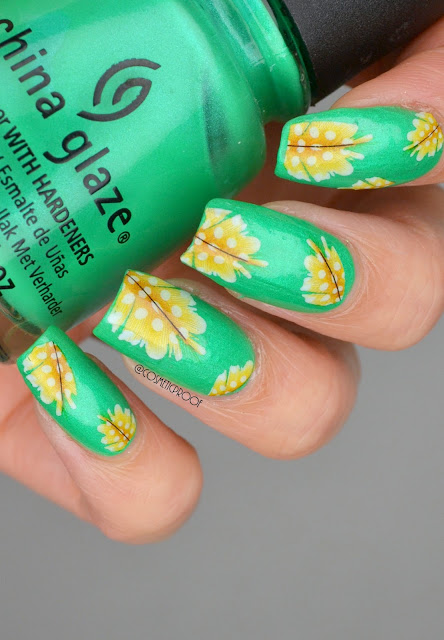 Happy Monday everyone and be sure to check out Renee and Trysh’s blogs for their final round of Summer Manicures this week!